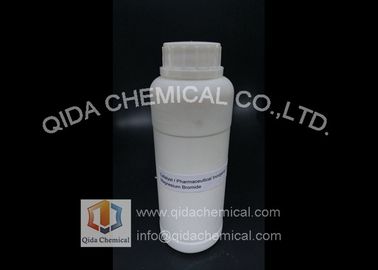 Magnesium bromide (MgBr2) is a chemical compound of magnesium and bromine that is white and deliquescent.

It is often used as a mild sedative and as an anticonvulsant for treatment of nervous disorders.

It is water-soluble and somewhat soluble in alcohol.

It can be found naturally in small amounts in some minerals such as: bischofite and carnallite, and in sea water, such as that of the Dead Sea.

Magnesium bromide is used as a catalyst for many reactions, typically as a solvent or used as a Grignard reagent.
The first being a solvent free one pot synthesis of dihydropyrimidinones which are used most often in the pharmaceutical world.
Dihydropyrimidinones are used in medications such as calcium channel blockers, and HIVgp-120-CD4 inhibitors.It also has been used as a tranquilizer.
Magnesium bromide in combination with CH2Cl2 catalyzes a reaction that causes specific symmetry and chiral centers through hydrogenation of olefins.
Magnesium bromide when bonded to other functional groups has shown more practical uses other than catalyzing reactions.
When bonded to an ethyl group it is used for regiospecific analysis of triglycerols.
Magnesium bromide hexahydrate is being worked with to be used as a flame retardant.
It was found that if 0.125 mol/L of magnesium bromide hexahydrate was added to a cotton material it acted as a flame retardant.
Magnesium bromide was used to synthesize the first stable magnesium silylenoid. A silylenoid is a compound that contains R2SiMX (M is metal and R is an organic moiety).
Traditionally only lithium, potassium, and sodium could be used.
The magnesium silylenoid is synthesized through the addition of magnesium bromide to lithium lithium methyl bromosilylenoid.
The magnesium atom replaces the lithium in the complex and has a bromide attached to it. This complex is stable at room temperature.